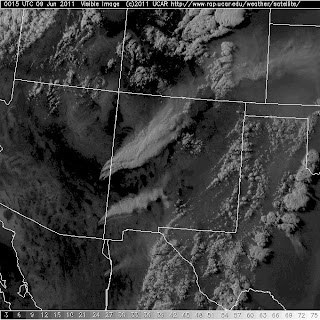 There is a bit of smoke out there as you may have noticed.  Where is it coming from?  The bulk of it is coming out of Arizona.  The Wallow fire is estimated at 389,000 acres and is 0% contained.  While the smoke is a nuisance for most if us, it's more than a nuisance for the people in the area affected by the fire.  With the winds blowing like they have been, it may be a long time before they can get a handle on this thing.  There are also other fires in Arizona, New Mexico and Colorado adding to the decline in air quality.
While the record snowpack and flooding is taking place in more northern areas, the south and west is dry as can be.  Let's pray that this thing can be controlled before towns are affected and let's hope we all get rain this summer.....after the flooding recedes.  Mother Nature is wicked isn't she?