If you are a resident of the Colorado Spings area, make sure to mark this down on your calender.  This is going to be a great event for a great cause. I am honored to be included in such a great circle of well known fy tiers.  I am a little bummed that I have to tie and that I can't watch the others that are tying. Stop by and say hi to me and all the others that will be taking time to drive here for this function. Check out this funny clip from a movie.  This is Dennis Leary, so there is some foul language involved.
It made me laugh and some days this is just how it is and how I feel.

I usually got up and turned on the news first thing in the morning.  That morning, I didn't turn it on for some reason.  I was getting ready for work that day.  It was the first day of work for me with my Uncle Sam.  I remember going to bed the night before, worried about going back to steady work.  I was 25 and had spent the summer guiding on and off.  I wouldn't call it steady work, but I spent a lot of time on the water and in the shop.
I got a phone call from my uncle saying he was late because he was watching what happened to the WTC.  I said, "Oh, what happened in 1993"?  "No", he said, "turn on the TV".  I did and by that time both the towers had already fallen.  I was only able to watch the news coverage for about 10-15 minutes before I had to leave.  On the drive to Las Vegas, NM, about an hour from Springer, we were glued to the radio, listing to what was happening.  It was hard to hear in that old van my uncle used to drive.  I spent most of the day in the attic of a motel, running electrical wires from room to room.  At the end of the day, in the lobby of the motel, we watched Tom Brokaw report live from NYC.  It was dark by then and most of the details of the day were know by then.  It was hard to comprehend what had happened.  Even to this day, it's hard for me to comprehend what happened that day.
That day changed all of our lives.  It changed the lives of my unborn children.  Last night, watching the coverage of that day, it seamed like it hurt more than it ever has.  I've grown accustomed to the faces and names of the heroes of Flight 93.  It feels like I knew them, their lives and their story.  I guess we all do.  People have moved on, but it's still hard to watch and hear the stories of the families.
My small kids still don't know exactly what happened and why it happened.  How do you explain hatred   to a 7 year old?  How do you explain why airplanes crashed into tall buildings to a 5 year old?  In time, they will come to understand what happened on that beautiful day in September.

An old childhood friend's son was born on September 11, 2001.  I felt so sorry for her.  Imaging having your child born on one of the worst days in history.  He is now a healthy 10 year old, and that is all that matters now.

I thought those were the coolest buildings ever.  They were iconic.  I remember as a small child how I thought they were so simple, yet so massive.  They were just long cubes in the city.  Standing at the base of them was amazing.  They were huge!   I remember driving out of NYC and staring at those building for as long as I could see them.  They were that dominate in a city full of tall buildings.  I haven't been back to NYC since.

Thank you to all who have served this country.  Thank you for being a cop, an EMT, a  volunteer fire fighter, a little league coach, a Dept. of Defense employee, a nurse, a Marine, a Cadet, or anything else in between.  Thank you. 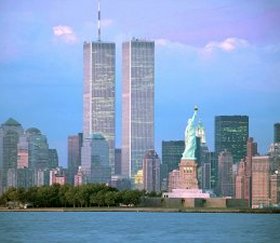 I am honored and proud to be included in Montana Fly Company's 2012 catalog with 3 new patterns for you guys to throw.  They are the Tungsten Hot Shot Nymph, the Sniper Baetis Nymph and the i-Stone, a Golden Stone pattern.

The Hot Shot is a general pattern that I use to show the fish something different.  The tungsten bead helps to bet the fly down and the red colored bead also gets the attention of the fish.  I have had some really good days on the South Platte and Arkansas River with this pattern trailing a Hopper Juan and hitting spots most people won't fish.  It is a great pattern and in the smaller sizes, I like to put on a red glass bead to reflect more color. 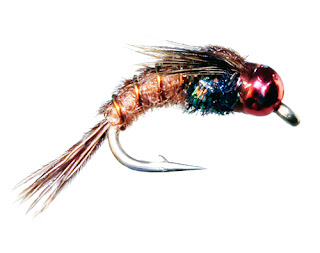 The Sniper Baetis is a sweet little pattern that you know will work on the techinical waters where big Rainbows line up to eat baetis nymphs in the late fall and early spring.  This pattern has proven it's self in the toughest hatches and on some tough fish.  A thin profile helps to get the pattern down and the fish eating it.  Easy to tie, make sure you have some of these in you box for the next time you find fish eating nymphs and emergers. 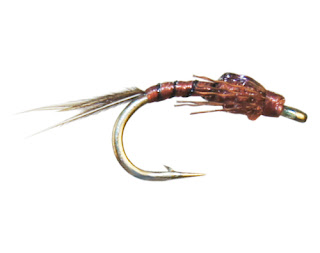 The Tungsten i-Stone was developed by finding a sheet of foam that was used to pack up my i-Mac.  A little fooling around with a caddis wing cutter and some new dubbing from Natures Spirit in a golden stone color and the i-Stone was developed.  Initial testing on the Animas River was not too promising but that may not be the best place to test a golden stone pattern.  More testing on the Arkansas River was a better idea.  The Ark. is loaded with golden stones.  It preformed awesome.  The wingpads held up and the tungsten and lead helped get the pattern down where the fish are.  It has quickly become one of my favorite patterns to use year around. 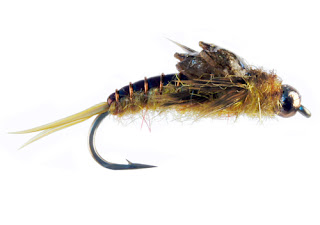 I've been pouting a bit for the last week or so, since I wasn't able to make it to the dealer show in New Orleans this year.  I had been to the last few 3 or 4 in Denver and was just getting used to getting my free swag which included fly tying catalogs, sample tying materials, hats, and beer.  One year I even scored a pair of waders.  I poured over the internet trying to find out what is new this year.  I assumed that my fly patterns didn't make it into the MFC catalog this year.  I caught glimpses of new products that won best of show for this and for that.  If you look now, you can find some stuff out there that is new.  What I really wanted to get my hands on was the MFC catalog.  I had heard they had some cool new stuff.  Well yesterday as I was cruising the internets, I ran across the link to the new 2012 MFC pdf. catalog.  If you click HERE, you will get the goods.  Please note that MFC did like 3 of my patterns and now have them in the 2012 catalog.  I'll have to post some tutorials of those bugs later when I have some time.  That's also the same thing I tell my wife when she asks me to fix something around the house.


MFC also has some sweet new fly boxes and other things you have to see for yourself.  The boat box won Best of Show for best fly storage system this year. You have to check it out! The new fish print items look really sweet also.  The boat box can hold up to 4,000 or so flies.  I think I might have to tie a dozen or so more flies to fill that thing.  I am not sure how a person like me that doesn't have a boat fits that thing in the vest. 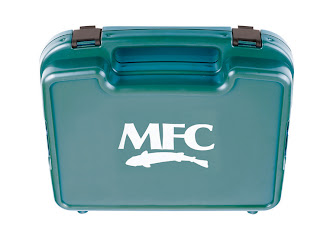 Other items that I have played with is the new Sage "One" rod.  It's nice and I said "it's like a sniper rifle, it's that accurate".  It did make me feel like I was hitting every nook and cranny I aimed for, but maybe I just thought that since that was what I read somewhere.   It is definitely worth checking out though.  I don't think that it is head and shoulders above other high end rods, but it is right there at the top.   I'd like to have a shoot out with the G Loomis NRX, the Hardy Zenith, the Sage One and the other big dogs out there to see where it fits in.


Another new item I was able to fondle recently down at Ghilles Fly shop was the new Hardy DD & CC Ultralight reels.  These are nice also and for the price, you probably can't beat them.  They are made in Korea, if you don't mind going that route.  I prefer my reels to be made in the USA, but some don't really care as long as the fish don't care.  The CC reels have a click drag and come in smaller sizes than the DD as you may have guessed.  The double D's are bigger than the smaller C's as in life but depending on your preference, they are both pretty nice.  The DD's have a disc drag and the smaller sized DD is around a 5wt. size reel. 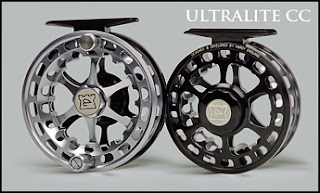