So a buddy of mine posted a picture here, and asked the question, "What would you tie on"?
With day 3 of fishing, I headed to "The Dream Stream" to check out what was going on.  Caddis larva was going on.  About 30 minutes into being on the water, the flows appeared to be going up.  There was a lot of junk coming down the river.  It came up about 50 CFS, not a big jump, but enough to throw things off.  The first fish came about 10 minutes into the day and guess what it ate?  A caddis larva.  The 2nd came about 15 minutes later and he also ate a green caddis larva.  It was a thick 20" Cuttbow.  After the water came up, the fishing went off for about an hour and a half or so and then it picked up a bit.  With all the junk and off colored water, I went to a pink SJ worm and it got things started again.  A few fish later I was  working a good stretch of water when it happened.  It always happens.  I was high-holed.  About 6 guys came and jumped in front of me.  I sometimes hate fishing in Front Range accessible waters.  But, like a New Yorker complaining about riding the subway or the congestion, we move on.  Soon the notorious South Park winds came howling down the valley and I had enough.   So if you want some action, whip up a few cream and green caddis larvas and go have some fun.  Flow was 168 and went up to 210. 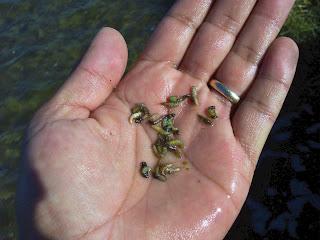 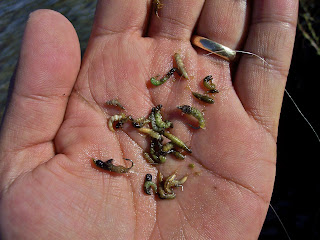 You can match them with these two flies. 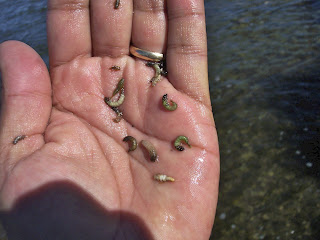 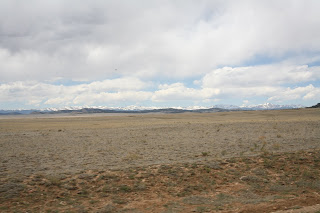 There is still a lot of snow up there to melt.
Posted by Hopper Juan at 7:34 PM