The many faces of the RS2

The Colorado State Fly. That's what this fly is. If you want to fish Colorado, I think they check your fly boxes at the borders to make sure you carry some variation of these flies. If not, they recommend that you get some as soon as you can. And for good reason. The original RS2 has been fooling trout in Colorado and surrounding areas for around 30 years. The name of the fly is explained below.

Soon Rim began to experiment with his own fly designs. He named his first successful fly Rim's Semblance, followed shortly thereafter by Rim's Semblance #2. He deliberately picked the word "Semblance" to indicate that this fly was not the imitation of any particular insect, which would have limited its function. Instead, the RS2 suggested a variety of insects. The RS2 proved to be an eclectic fly that has replaced all other flies (dries, emergers, nymphs, etc.) in Rim's fly box. The RS2 comes in many sizes and colors, but the shape remains unchanged as is the name.

Different variations of this fly have come and gone and their is always someone trying to add the latest and greatest bling to this fly to make it better, but I just don't think that can happen. The original is just that great of a fly. Born on the South Platte River, the RS2 is now sold and fished all over the world. This fly has stood the test of time. The many variations work well and some people prefer their patterns to the original. I prefer them all and have used the original the most and therefore have the most confidence in it. Even the original has variations. I tie 3 different variations of the original changing only the wing material. I don't know yet if one style is better than the other, but I will continue to fish and let the fishes let me know if they prefer one over the other. Tying the RS2 is fairly easy and it is truly a guide fly. Only using 3 materials a good tier can crank out a dozen in less than an hour. Listed below are a few of my variations that I carry in my box and ones I usually have tied onto the end of my line. 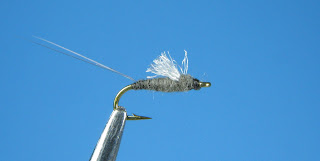 RS2 Antron Wing. This fly is a bit quicker to tie and is the one I use for guiding as it can be replaced quickly. A single strand of bright white antron is used for the wing. It can be tied in and measured and cut to length and it is ready for the next fly. 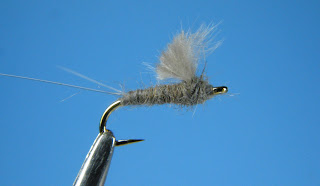 My version of Rim's original RS2 using natural beaver and the fluff from the base of a dun saddle hackle. Rim ties his using a really tight body and gets great segmentaion from the dubbing. I have not figured out how to get my dubbing that tight. 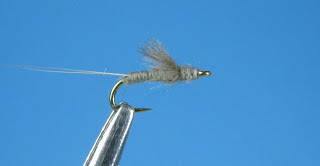 CDC Wing RS2. This RS2 uses CDC for the wing and works well as a surface emerger due to the CDC being able to float they fly in the film. This can be deadly when the fish are extremely picky and are eating emergers right in the film. This is my favorite version of the RS2. 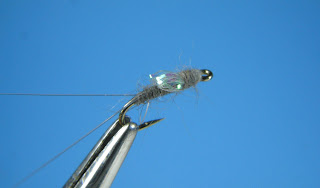 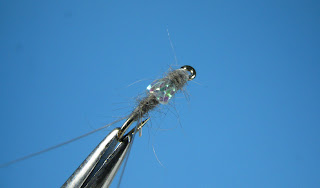 Sparkle Wing RS2. The feather wing is replaced with a flat braid looped to add just the right amount of flash. This is a good fly to use when nymphing deep and the sun is out. The flash get the fishes attention and the profile is right. How can they resist? 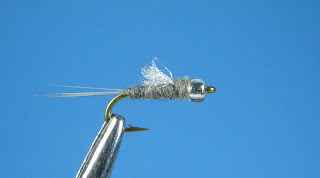 Mercury RS2. Just slap a silver glass bead on the fly and you have another variation of the fly. This fly works as well as the original and can be just what you need on that slow day. I have fished this fly the least and don't quite have the confidence that I do with the others.
All flies are tied with either Iron gray or gray 8/0 thread. I use a TMC 101 hook for all variations of this fly. I also use either gray beaver or adams gray superfine dubbing. The antron wing RS2 is the easiest of the variations to tie. By using antron and superfine dubbing, it makes tying this fly faster and somewhat more durable. When guiding, I can burn through a dozen or more of these a day. If I have a trip the next day, the last thing I want to do is come home and tie a couple dozen complicated flies after a long day on the water. I carry sizes 18-24 in my boxes and mostly in a gray color, but I do have a few black and chocolate RS2s stashed away for those times when I need a different color. Some people swear by an olive RS2. I have yet to have fish turn down the gray or chocolate colors and do not carry any olive RS2s.


Tying the RS2 from Juan Ramirez on Vimeo.
A new updated version of this popular fly.  I have deleted the previous video of this fly.


RS2 Sparkle Wing from Juan Ramirez on Vimeo.
RS2 Sparkle Wing tied during the favorite South Platte patterns class on 01/29/10.  This pattern is a varation on the famous RS2.  Tie some up and give them a try.  They work great for baetis and I fish them year round. 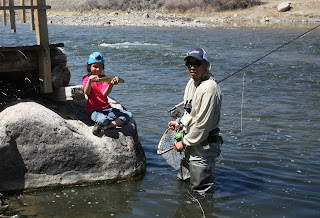 Some days are just better than others!
Arkansas River, 2013
Posted by Hopper Juan at 6:00 AM 5 comments:

It's not only for chicks.  My wife tried to kick me off of it today, saying it's only for chicks.  If you dig around a bit, you can find some really good stuff on there.  Take a look at my page, as I have trolled the interwebs and other Pintrest pages for some killer fly patterns and have posted them here.  I am picky, so it will grow as I troll.
http://pinterest.com/hopperjuan/
Posted by Hopper Juan at 7:48 PM 2 comments: