I thought I would have tons of time on my hands when I made the job switch.  I thought I would have lots of time to tie flies, to do all the things I've been putting off for the last several years.  I've found out that that is not the case!  Just like retiring, you find more that needs to be done.  But, I have been having a good time guiding.  It's not easy, but the rewards are great and enjoyable.  The Tricos in Elevenmile Canyon have been great.  I've been able to fool them with Parachute Adams, but some of them are getting pickier after getting fooled once or twice. 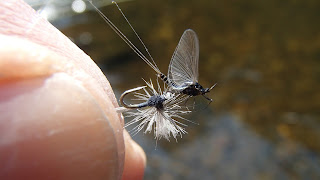 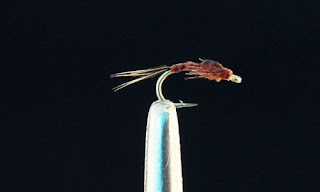 Also, my Sniper Baetis has been money!  This thing has been fooling them left and right.  Along with a Squirmy Wormy, it's been great.
The Tricos are still going strong, but the spinner fall depends on weather.  Warmer mornings gets things moving earlier and cooler mornings take it a while to get moving.  A #24 parachute or a 180 Degree Trico have been working well.  The smarter fish eating single spinners require a bit more precise imitation in a size 26!  They will eat it, but hooking them is a bit challenging with the small hook.

The Arkansas has been fishing great as well.  If you can cast, there are hungry fish all around.  Some fish have been taken on big dries, but most have been on droppers such as the PMD Barr Emerger and now, anything with red on it.  Think tungsten to get down where the fish are in faster water.  Pocket water is key!

If you would like to learn more about these waters, let me know and we can get out and learn a few things!  juan@anglerscovey.com

Posted by Hopper Juan at 8:17 AM No comments: