Fishpond and Hardy.  Not a bad combo.  I will have to report back to you on the Hardy.  I have had it out once and it seems like a fine stick.  All I did with it was nymph and it really did cast a nymph rig smoothly.  I really need to put this rod through a good workout.  I just need the time! 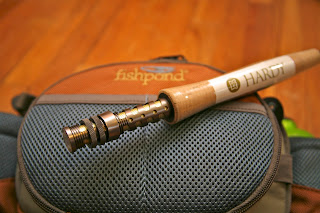 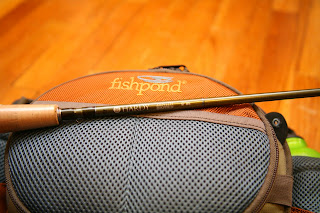 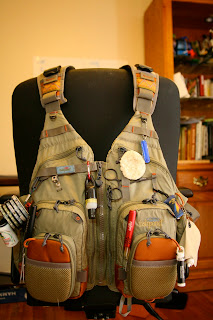 Building on the previously posted pattern of the Wonder Larva, this pattern steps it up a bit and covers your bases when the caddis start emerging and you need a pupa pattern.  The body is still the same as the larva, utilizing the MFC Wonder Wrap or similar.  The major addition is the wing buds and the antenna to suggest the pupal stage of the caddis.  I add the Medallion Sheeting wings by cutting a strip of 1/4" wing material and twisting them to form a tie down point and tying them in behind the bead.  I then add some antenna using either wood duck, pheasant tail material or even some Floure Fibre or Organza material.  Do you need the antenna?  No, but it sure helps to make this pattern look good and fancy.  Add some legs with some hen back fibers, which helps get the pupal look.  The dubbing covers the tie in of the wings and antenna and legs and then shape the wing buds using your scissors.
When the fish start looking for the pupa, this is a good pattern to have.  This is a great companion to the Wonder Larva and having a few in the box is always a good idea. 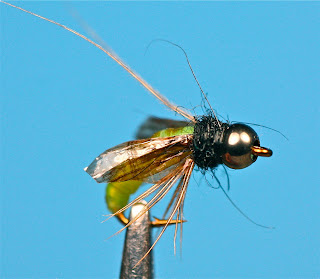 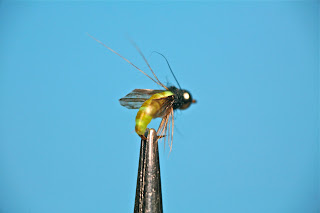 I came up with this little caddis pattern a few years ago for fishing the Arkansas River in Colorado.  The Ark is one of my favorite places to fish.  The fish are not generally big, but they are plentiful and pretty much eat anything you throw at them.  The Ark has tons of caddis and the fish have access to them year around.  This is a simple pattern only using a couple of materials.  Simple fish usually don't require complex patterns, but I am a fly tier and tend to think so.  This pattern utilizes a material called Wonder Wrap.  Wonder Wrap is a Montana Fly Co. material and is very similar to span flex, sexy floss or any of the other stretchy materials out there.   You can simply substitute to get what you need. All I do is slap a bead on a scud hook, wrap the Wonder Wrap down to the bend and build a thick-ish body and tie off near the bead.  I then finish it with some black or dark  dubbing behind the bead.  I tie these in two colors.  Chartreuse and a tan or cream color.  If you want to spice it up a bit, hit the back of the fly with a marker to form a darker back strip.   They are a great option to go to when the caddis are around, which is every day!

As the 2012 Fly Fishing show came to a close, all eyes were on the Denver Broncos.  While fly fishing had been the talk of the town the previous 2 days, it was time for Touchdown Timmy to try to lead the Broncos to Victory.
It is always a great time at these shows and this year was no different.  There is always time to meet new people, catch up with old friends and to answer tons of questions.  I spent this year digging through piles of materials looking for only a few items to tie.  Ask anyone, and they will tell you that I brought way too much stuff.  But, who did they come to when they needed something?  Yup, it was me.  I even traded 64 hooks for 100 hooks to Shea.  The price goes up when you are on the water....or the bench.  I messed around with a new hopper pattern, one that most of you may have seen already.  It is one I would like to share with you guys to see what you think.  I'll get around to that later.  One of my favorite things this year was being able to meet Mark Petijean.  I stood there and watched him work magic with his magic tool and place all that high quality material on a hook.  I was humbled, knowing that when I grow up, I want to be as good as a fly tier as he is.  Not to mention his tools that he has created.  As the show came to an end, I had tied a lot of flies.  I had made some new friends and made some new contacts and scored a few new things.  It was great as usual and as the crowd thinned on Sunday, it was time to hope the Broncos could somehow, just somehow beat the Steelers.  It was a great weekend. 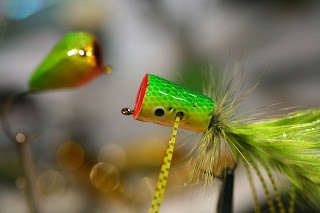 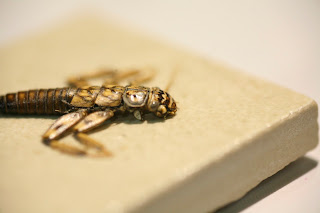 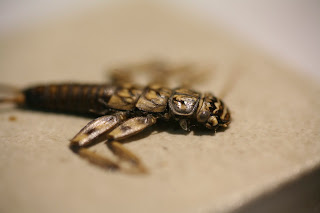 I will be at the Denver Fly Fishing Show this weekend tying flies all 3 days.  I'd sure love if you would stop by and harass me.  I'll be joining some of the areas best tiers there at the show like Carl Pennington, Shea Gunkle, Casey Dunnigan, Jason Goodale and more!  So stop by and say hi to me.  I am looking forward to it.
I will also have materials kits for tying the Hopper Juan for sale as well as a pile of already tied Hopper Juans for sale! 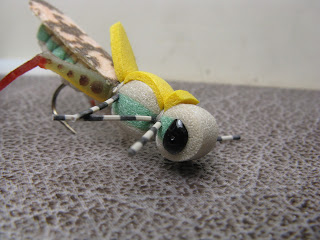 Want to see me get tied? Stop by and see me at the Fly Fishing Show this weekend in Denver, CO.
Posted by Hopper Juan at 7:42 PM 3 comments: