On certain rivers, PMDs rule the summer.  I have been in some great PMD emergences and have great success on various PMD emerger patterns.  Here is one for you to try out.  It's a variation of my Baetis Ice Emerger.  Give it a try the next time those big fish are eating emergers right below the surface.  Drop it off an adult to track it better and have fun! 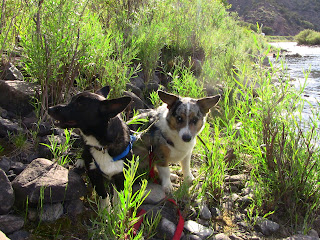 I’ve been able to get out a few times in the last few weeks, but…..I don’t have any pictures to share with you.  My mantra for blogging is “stories are worthless without pictures”.  So if you are still with me, I’ll quickly cover what I have been up to.  First, I took a few days off of work to go camping at Williams Creek near Pagosa Springs, CO.  My wife and kids met their friends down there last year and I promised I would go this year.   A few days before we were to leave, our car broke down.  The alternator fried.  It was a Volvo and if any of you have one, you may know that they are pretty expensive to fix.  This was right after I sunk $1,500 in to it to maintain it.  That killed that trip, but I still had the time off.  One day, I took the kids up to Rosemont Reservoir near Colorado Springs. It was fun as they were all able to strip in leeches and feel the hits and hook the fish.   They each landed several and it was good experience for them to feel what it is like to “feel” the fish.  I made the casts out for them, but they did everything else, including fighting over who would unhook the fish!  The next day found us traveling to New Mexico so the kids could stay with my parents and get some time on the ranch having fun and doing some work. My dad still grows alfalfa and he had just cut the hay.  It was about 3 weeks early this year, but what hasn’t been early this year?  We needed it to not rain and it did.  It got the hay wet and so we needed the wind to blow.  It didn’t.  If you know the area, you know that a day of no wind comes around about 3 times a year!  I left the day after and headed to the Cimarron River near Cimarron, NM.  This was my home water and where I learned to fly fish and to guide.  The Cimarron is a small little tailwater stream the size of the Middle Fork of the S. Platte and with the population of the Arkansas River.  It also has the bug life of both the Arkansas and 11 Mile Canyon combined.  I arrived and saw PMDs, Little Yellow Sallies, Golden Stones and Salmonflies all fluttering around.  I also saw fish splashing the water, eating whatever happened to be on the surface.  It was great!  I started nymphing, and then realized that it was summer and the fun is on top, so I went to a stimulator.  I then remembered why I loved fishing foam flies.  They floated a lot better and longer and after hooking and landing fish, they didn’t need nearly as much care as dubbed patterns.  The Hopper Juan was called on and performed perfectly.  Although it has the word “hopper” in the name, it doesn’t mean that’s all it covers.  It passed great as a golden stonefly, at least that what the fish told me!  Around noon, things got slow as I expected with so many bugs in the water and the way fish were eating, they got full!   That little river always amazes me.  The fish were fat and healthy.  The river was not crowed and I had a great time.  The next day, my wife and I had a date.  We headed into Cheeseman Canyon, her first trip there.  It was a good day as she landed her first “bigger” fish around 17” right off the bat.  I was able to land a big, fat 21” cuttbow right above the “Narrows”.  I actually had to land her in the fast water as that was the only place I could.  I was able to get down to the water to land her, but getting back up the smooth rock faces was a challenge and I got stuck with nowhere to go after getting halfway back up the rock face.  I finally made it back up and then had to figure out how to get my rod and reel, which was halfway on the rockface as well.  I finally got it and walked back to my wife who was happily fishing.  I told her I was almost on my way to Deckers.  After nymphing for a while, I switched to a Hopper Juan and targeted the faster water.  It was a success.  The fish were looking up and eating the bigger bugs.  I landed 4 more fish before we decided to head out.  The walk back out can be hard after spending all day in wading boots.  We ended the day with a great dinner in Woodland Park.  This weekend, I hope to get out, and have a camera with me.