The PMDs in 11 Mile Canyon have been pretty good.  This pattern has been money on the picky fish there.  It's a simple pattern, basically a floating Barr Emerger.  If you are looking for a great little pattern, give this one a try.

Email ThisBlogThis!Share to TwitterShare to FacebookShare to Pinterest
Labels: pmds

"Unity with the Universe"

Do me a favor.  Take 15 or so minutes to read this article.  It's a great read and offers so much to fly fishers and anyone who loves fly fishing.  It's a great piece of work and a great layout with awesome pictures.   Click on the photo to go to the story. 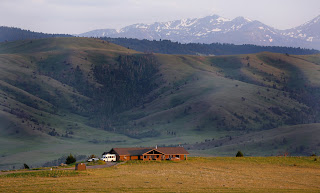 A few more thoughts on rods and the new Scott Radian.

My initial thoughts on the Scott Radian were whoa! 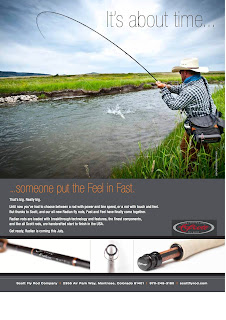 If you have followed me on this blog for a while, you may know that I love fly rods and I love comparing them to each other.  I try to give you my feedback on how they feel to me, but every angler is different.   Some could care less about new gear and some just love it and want to find all the info they can get.
I have always considered myself a Scotthead, loving all the Scott Fly rods.  The old Gs, the newer G2s and the S4s.  The problem I was having with Scott was that they had old rod designs for the standard freshwater rods.  The S4 was released in 2007.  Newer rods had been coming out every year but the S4 was not being replaced.  The S4 was great when it was released, but 6 years later it was still their flagship fast action rod.   In early 2013, I got word that there was a new rod in the works and would be released in July.  A new S5 I thought.   When the Scott Rep came by Anglers Covey, I hopped in the car and drove as fast as I could to the shop to cast the new prototype.  I wasn't too impressed.  It was still a prototype and sometimes they are heavy and unfinished.
When the new Scott Radian was released, I was excited.  It won best of show at the 2013 IFTD show and many people were praising the feel and look of this rod.  I had to get my hands on it.
I rigged up the 9' 5wt rod and took it on Angler Covey's casting pond.  Dang!  This rod is sweet.  It felt great and I was already trying to figure out which rod I could sell to buy one of these rods.
A few days later, I brought one of my Hardy rods over to the Covey to compare to the Radian.
I was a little afraid the Radian was going to feel better than the Hardy Zenith.  It was a 1-piece rod I threw in the car that morning.  Both rods were casted by me and by a few others at the Covey and the unanimous decision was that the Radian was a sweet rod, but the Hardy was just that much smoother, lighter and overall pleasant to cast.  Now, this was the 1-piece rod we were casting, vs. a 4 piece rod but the 4 piece  9' 5wt. Zenith is the next smoothest rod I have ever cast in a 5wt.  Earlier in the week, I was able to cast the 9'4wt G. Loomis NRX LP and I was impressed.  That is a sweet rod also!  It has a very soft tip and cast like a dream up close.  I tend to fish up close, within 20 feet to rising fish eating tricos in 11-Mile Canyon and BWOs on the Arkansas River.   I rarely make longer casts than 40ft.
In my opinion, the top rods out there right now are the Hardy Zenith, the G. Loomis NRX LP, the Scott Radian and the Orvis  Helios 2.  I have casted all of these rods, but have only fished 2 of them.  In the future, I will do more casting and more fishing with different rods to follow up with more information.  2 rods that I really didn't like:  The Sage ONE and the Winston BIII-SX.  I'd like to beat the Winston BIII-SX with the ONE.  I am sure the One would survive and then I could fish it.  The Winston 9' 5wt is just that bad.
I'd love to hear your thoughts on rods.   My favorite rod may be the one you would like to beat with my least favorite rod. We all fish differently and rods are different to all of us.  That is what is great about it all.
Would I suggest a new Scott Radian?  Yes.  It is a great rod, but to me, not the best one out there.
Don't be surprised if I change my mind on that later down the road.  That rod still makes me say whoa!
Posted by Hopper Juan at 9:20 PM 32 comments: