Carl Pennington called me up as I was driving to Denver to catch the final Broncos game of the year and asked me if I got his e-mail.  I said no.  He then told me that there was a picture of my hopper in the outdoors section of the Denver Post.  When I got to Denver, I found a Sunday Denver Post and headed straight for the Outdoors section and there it was!  I was suprised by the size of the photo.  Usually they put a small photo attached to the story and that's it.  So here it is, the happenings this week in Denver and some Hopper pattern. 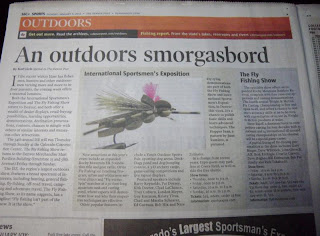 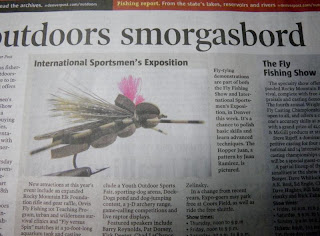 PHOTOS STOLEN FROM CARL PENNINGTON AND USED WITHOUT HIS PERMISSION
Posted by Hopper Juan at 9:32 PM