Now if that didn't grab your attention, I am not sure you have a pulse.
Day 1
06/26/09
What to do when your family leaves town for a week and you have access to three vehicles, a little cash and a dog to care for? Get high! The idea was to hit several rivers and one high mountain lake. It started on Thursday when I rushed home to grab the dog and to change vehicles from my car to my mom's van that had all fishing gear pre-loaded and a mattress with down blankets and pillows thrown in the back. Soon, we were headed west to Salida for a night spent camping riverside in the van. On the way, time was spent jamming out to Michael Jackson's hits as all radio stations were paying tribute to him and his career. After a night on a soft mattress, we rose at 5:00am to get a start on the day. We headed west towards Monarch Pass to the Waterdog Lakes trailhead. After arriving and reading all my gear, I realized that it might be a trek up the hill. I had a loaded, fully inflated float tube, 2 rod cases, 2 reels, water, camera, dog food, boots, waders and fins. I think I had it all, at least it felt like I had more than enough than I needed. The trail is only about two miles but it felt like several. I was worried about my dog and his short legs. Was he going to make it up the mountain alright? About 1/4 of the way up, I realized that he was not the one to be worried about and he would make it just fine, it was the other one in the party that needed a little encouragement. After reaching the lake, I was in a hurry to get my waders on and fish. I did just that and rigged up my 4wt and a mini leech. I saw a fish rise about 15' out and I made my first cast. Strip, strip and I had on my first fish. A nice Greenback Cutt, I took a photo and released it. It was my first Greenback I've ever caught. Second cast and second fish caught. My third cast wasn't as lucky as was my 70th cast. Where did they go? Eventually, I picked up a few more. The day remained cool and a bit windy, with weather not too far away. I did manage to get out on the float tube after I harassed all the shoreline cruisers. I hauled that thing up there and never caught a fish off of it. Buddy, the dog, was out there with me and climbed on the side of the boat after sitting in a bit of water for too long and fell off and took a dive. After rescuing him, it was time to head back to shore. I was a bit cold, as leaky waders will make you cold. I thought I fixed those leaks, but you never know till your immersed in cold water that you realized there might be a few you missed. There were a few risers out and about. I used a Griffin's Gnat to fool a few. By 11:00am it was cooler and rain was on the way and more people were headed up. About halfway down the trail it started to rain lightly. At the bottom of the trail, it was raining really hard. With a half day left what were we going to do? The Arkansas River was really full and not a place to fish. It was running about 3,000 CFS, a bit too high for me to try to fish. We started towards Colorado Springs via Buena Vista. The Middle Fork of the South Platte is on the way so I decided to check it out. The plan was to fish it on Monday 06/29. It too looked like chocolate milk and was running high. So much for that plan. So much for my other plan of staying around Buena Vista and fishing the Arkansas. The next stop would be in Hartsel on the S. Fork of the S. Platte. I fished a short section that some people had just gone through and it didn't fish worth a crap but I wasn't about to head home early, there was more fishing to be had. The idea I had was to hit 11-mile Canyon in the evening and it was only 3:00. So why not stop and fish? About 5:30pm I drove up through 11-mile canyon to fish some evening caddis. I swear that for every 5 fish that try to hit you r caddis fly, only one comes close to getting it in their mouths. It was a while before I actually landed a fish, even though the fish were quite active. A skittered caddis was what worked the best. After a good fish, I called it a day and Buddy and I head back home. He was able to sleep for about 3 hours throughout the day, gaining strengh for the following days. We had a good nights rest and prepared for the next day..... 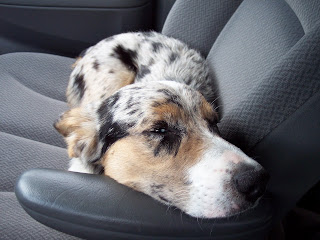 Buddy getting pumped for the hike in. 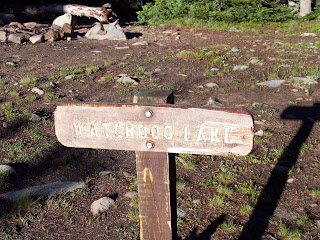 At last! I thought I might die, but I wanted to fish before that happened. 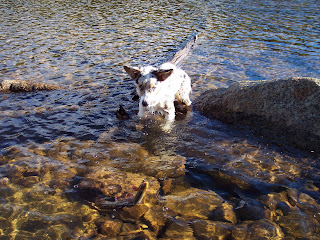 Buddy wondering what the heck is going on and how did I fall off that rock? 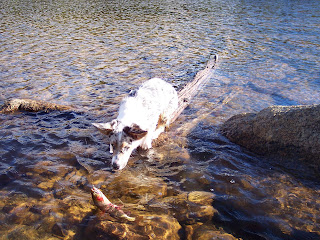 This time, I'll keep from getting wet. 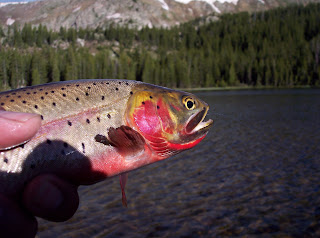 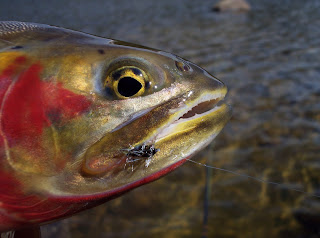 Time to throw some dries to cruisers. 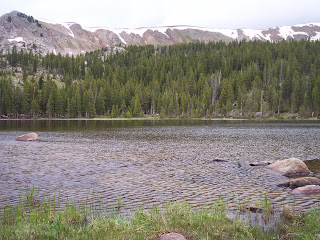 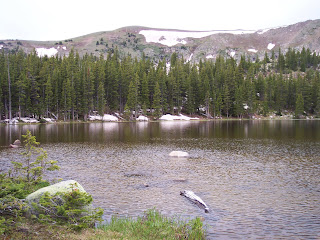