Another day in the Rockies and another day to fish. I choose to check out the upper Taylor for the day, never having seen it, I assumed it was a decent sized creek. It was a full size river. It was flowing pretty good and it was clear. I decided it was a good place to start, so I rigged up and headed downstream. I got to a property line and made my first cast. A second later, I had on my first fish. It was a nice little brown, the first of many that morning. I continued to fish until noon, stopping, as I was starving. Lunch was to be peanut butter and jelly. Man, I was getting tired of them, since I had it for dinner and breakfast. Oh, well, I had to eat. After lunch, I drove down to the lower Taylor just to check it out. I pulled over and stood there and looked at all those big fish. After about 5 minutes, I decided that since I was there, I might as well fish it. I gathered my gear and grabbed my 4wt, thinking it was as good as anything. Besides it was either that or my 2wt. I tied on a single #24 midge on 7x tippet. I picked out a fish and worked it over a few minutes. Of course it would move out of the way every once in awhile, but one time it moved and I felt something. My fly was gone and I had no idea if she ate my fly and immediately broke It off, or I just snagged her and got broken off. I guess I will never know. I was just in my jeans and I didn't want to get my waders on just to fish there. Waders aren't necessarily needed there, just if you happen to hook a fish, they would come in handy. After about 20 minutes, it started to rain and everyone out, gathered their things and headed for their cars. I headed for Willow Creek. After about 2 hours,it cleared and I decided to try a short section of Willow Creek. I fished about 20 minutes and landed a couple browns and one Snake River Cutt. I wanted to stop by the General store I saw on the way up to the creek. I stopped and found that they actually had some real food! I bought some goodies and went back to the van to enjoy them. Later in the day, I headed back to the upper Taylor. I rigged up the 2 wt with one of my Hopper Juan's and just had a blast. All the fish in the morning were caught on a dropper and finally the fish were looking up for a meal. I had a blast throwing big bugs on my 2wt. Many more fish were caught and I decided to call it a day. The plan was to spend another night there, but for some reason, I just kept driving. I decided to head home. Buddy was out of food and so was I. I was tired and thought a day spent at home might be a good idea. Once we left, Buddy never made a sound. I got home at 11:00PM that night and went straight to bed. Buddy was not amused that he had to get up and go to his bed. We still had one more day to burn, but again, we were at home with no plans for the next day. 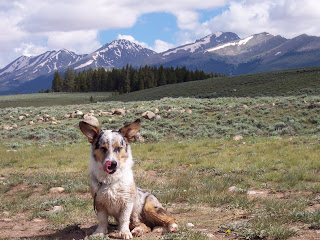 Buddy ready for another day after having breakfast. 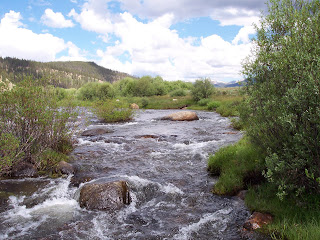 Some of the water I was fishing. It was flowing at about 340CFS. A bit high, but still lots of fish that were hungry. 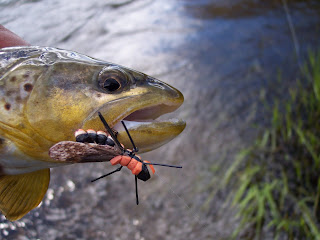 Throwing big stones on a 2wt. was a blast!

Just outside of Buena Vista. 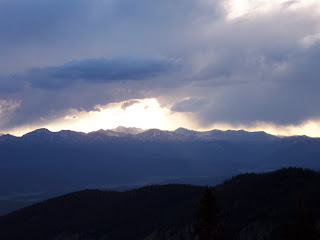 On top of Cottonwood Pass. I couldn't believe how amazing it was at sunset. I didn't want to leave.
Posted by Hopper Juan at 8:54 PM