Day 2
06/27/09
After getting a good nights rest, I awoke to realize that I didn't have a plan for the day. I had originally planned to be fishing the Arkansas since I had been hearing reports that it was on fire, but when I drove by it on Friday, it was basically blown out. My other plan was to fish the Middle Fork of the S. Platte, but once again it was like chocolate milk. So with out a plan and anything to do, I did what most men would do. I called my wife and said I was at home and thinking of going somewhere. She said that sounded like fun and so a plan was hatched. I would head back towards Buena Vista and see what I could find. Since all my gear was already loaded in the van, all I needed to do was get some more clothes, a few extra rods and reels and some more food and water. I guess it would have been a good idea to get Buddy some more food also but that never crossed my mind. So off we went. Not knowing where we were headed was somewhat fun, but also a little worrisome as it was possible for me to leave and end up back home a few hours not having a plan. Taylor Park was our destination after talking with a friend at the Angler's Covey parking lot. Maps were pulled out and locations discussed and that was our destination. I had never been there and it sounded exciting. A quick stop in Buena Vista at the grocery store and then we were off again up in elevation headed up Cottonwood Pass. I watched the thermometer drop as we headed higher. It was 86 in B.V. and once we reached the top of the pass at an elevation of 12,126' it was 52 degrees. What a change. And what a view! Holy crap I said as I looked out towards the west over the Taylor valley. The mountains were so incredible and awesome. 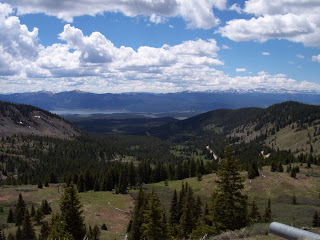 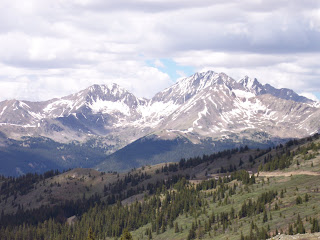 I took a couple photos for a family from Nebraska and they too were amazed. I said, "nice view huh"? The lady replied, "yea, were from Nebraska and there is nothing like this out there. You could stand on a soda can and see both ends of the state". Another hour or so and we were on Texas Creek. I didn’t think it was going to be that big. It was probably running about 100CFS. I walked right up to the most beautiful pocket of water I have seen in a long time. On the river right, it was a little self that dropped off to about 18” of water. A beautiful seam ran about 18” off the bank and there were a couple of fish rising. They were browns and they took the caddis on the first few drifts. Like a kid in a toy store, I quickly made way upstream, jumping in the van to move higher. I soon came to the meadow like section and it was beautiful water. I did see fish, but t hey too saw me. It was a bit too hard to fish that water in higher flows, so I moved even higher. I eventually got to areas of the road were I was afraid I might leave part of my mother’s van on the rocks, so I pulled over and started to fish. I pulled out my 8’ 2wt rod with a new Sage Click II reel that had never been fished and I was going to break it in. After a few missed fish, I made it to some more pocket water were the fish were easier to locate. I finally hooked up with a nice fish for that creek. It was about 12-13” and was a pretty good fight on that rod and the higher flow. 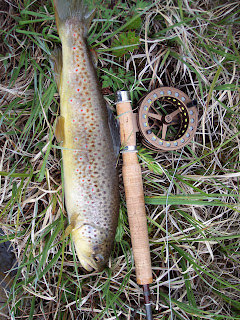 Buddy and I had made our way upstream and it was getting late so after just one more fish x 4, we headed back to the van. About half way down, I spotted something that I was not expecting. A moose and her calf! I have seen them before, but never in Colorado. I had not expected to see them. It was a nice surprise. They were located across a small pond and Buddy barked enough to chase them off only after a few pictures. My batteries decided to die just at the wrong time.

After another long day of driving and fishing, both Buddy and I sat down by a small campfire and had dinner. Buddy enjoyed Purina One for puppies and I enjoyed my peanut butter sandwich, one of many I would have and eventually get very tired of. We crawled into bed, Buddy wet from a misstep on a log crossing and myself deciding to put on some fleece, just in case. It was 36 degrees when I woke up in the morning to begin a new day…. 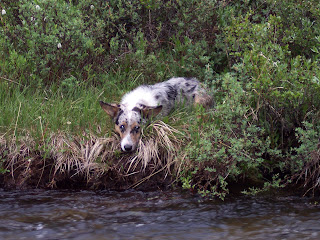 Buddy being a good dog. 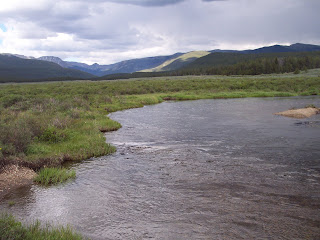 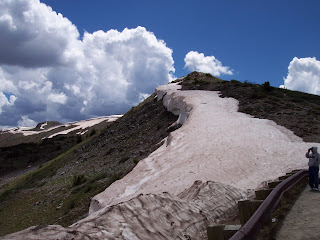 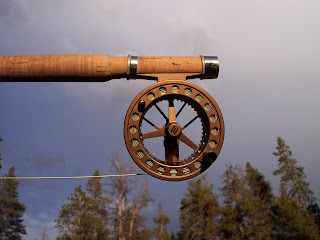