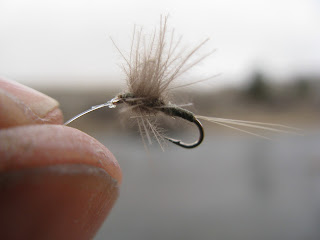 When Ben first contacted me about coming to Colorado, I jumped on the opportunity to take him to one of my favorite areas of the Arkansas River.  While we could have gone anywhere on the South Platte drainage and had a good time, especially the Dream Stream section for lake run fish, that wasn't the "Colorado" I wanted him to see.  The Arkansas in Bighorn Sheep Canyon is usually deserted for the most part, as most people stay on the various sections of the S. Platte.  That is ok with me as there are plenty of fish and bugs waking up on the river.  As we arrived, I explained our plan of the day, to fish a lower section of the river then move to another stretch later in the afternoon for a possible BWO hatch.  Our first stop was well worth it and if we only fished that section and left, the day would have been a success.  But, on we went for more.   The clouds rolled in and with them, came the emerging nymphs.  The Browns and Rainbows switched from stoneflies and caddis in the early morning to BWO nymphs in the afternoon.  A switch to a #20 Mercury RS2 was just what they wanted.  As the wind screamed down the canyon, so did a few adult BWOs.  We saw a few adults on the water and a few fish rose to them.  I couldn't resist.  I had to tie on a CDC Dun.  It worked.  They ate it without hesitation.    It was good.  It was fun and it was what I hoped Ben would be able to enjoy and remember.  We didn't see another person around us all day long and that is what I was hoping for.  I think Ben will be doing a little research on where he wants to fish next time he gets back to Colorado.  Maybe next time, we will go chase some of those hogs on the Dream Stream. 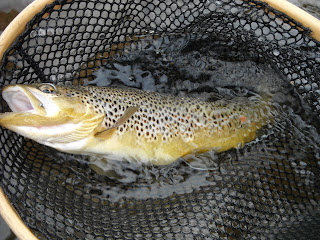