So the story goes that this is little Trevor Manhart's first fish he's ever caught.   Now considering that he is 5, he probably hasn't had as much time on the water as some of us.  Now image this.  Father's Day 2010, in Montrose, Colorado, a co-worker of mine is visiting his father and at sometime during the day, they walk down to the local pond/lake that is part of the community.  I image this water doesn't get fished much, but looking at it, it looks like great water.  Trevor was exciting about fishing, using an old Fenwick Ultra lite spinning rod with 4# test.  That day they tied on a Panther Martin with 2 hooks clipped off and the barb pinched down on the remaining hook.  While Trevor was reeling in, the fish hit.  Being 5, he fought the fish but he tired quickly and handed the rod over to his dad, Steve.    After a battle, the fish was landed by a firm grip of the tail, and just then the hook fell out!   It measured somewhere around 27" and I wouldn't argue with that,  maybe add a couple of inches just for the hell of it.  Many of us dream of landing a fish this size and few of us us have actually been able to hold them in our hands.  I would bet that none of us have ever had a first fish like this!    The look on Trevor's face is priceless once he figures out that thing is about half as big as him or more.  The big brown's mouth could have easily swallowed a smaller child and I think Trevor realized that as he looks to be bolting back to Grandpa's house.  Enjoy, because you might never see another 1st fish this big by a little guy. 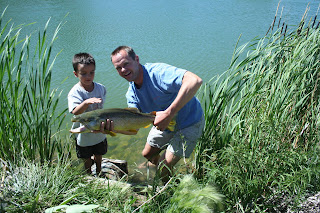 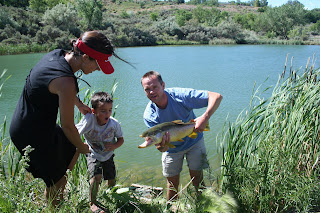 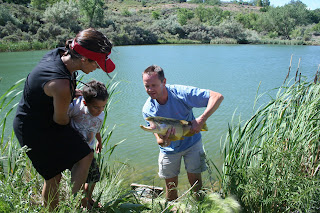