Are you fishing hoppers yet?

You should be!  The fishing right now is pretty good.  I was out today and fished a hopper/dropper set up for about an hour.  It was fun.  I was basically running and gunning, not having much time and only wanted to hit choice areas.  I moved about 12 fish, with about 50% of them on the hopper and 50% on the dropper.  The hopper pattern I used is the same fly I used at Rainbow Falls. 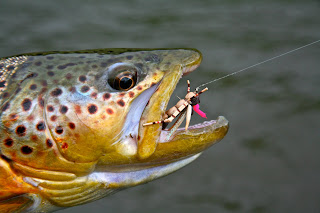 It was still rigged up and I just re-tied a dropper on to it.  The dropper was my Tungsten Glossy Back Baetis Nymph. 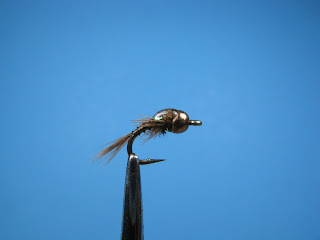 The fish pounded the hopper near the banks and that is what I love most about this type of fishing.
The biggest fish of the day was a 19" rainbow that was almost as think as it was long, she took the TGBB and proceeded to take me up and down the stream until I finally netted her.  Of course, there are no photos of said fish.
The hopper in the photo above no longer resembles the actual pattern as it is now chewed up and missing about 65% of the hair.  It can still be fished and probably still has another trip it could be used for, but I think I'll just retire it now.  It has done what it was tied to do.  To hold up a dropper at the right depth and to catch a few fish.  That's good enough for me!

If you want to throw some hoppers, do so NOW!  I don't wait until some report says it's time.  Fish are looking up for adults and when they are eating Doritos, and a hamburger steak is offered, it's usually not turned down.  Just remember to throw close to the banks and enjoy the excitement when a nice brown rolls on it and takes you for a ride.
Posted by Hopper Juan at 8:01 PM