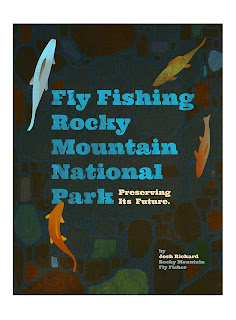 For those of you who have ever fished Rocky Mountain National Park, you will find this DVD a great addition to your fly fishing library.  If you have yet to fish the park, this DVD will have you wanting to schedule that trip as soon as the ice comes off the water.
In almost a complete opposite style of the current fly fishing DVDs out there right now, Josh Rickard has completed a new film about fishing the park.   This is not an action packed, grip and grin with photo-drones floating above the water's surface capturing video footage angles never seen before with the most current techno/hip hop/alternative music blasting in the background film.  It's more of a relax and drink a beer or even chocolate milk type of film.  There isn't a lot of gear information packed into this film, which I was appreciative of. If I already know how to fish and want to go there, I already know what to use.   Instead, there are crystal clear images of some of the lakes and streams that you will encounter.  The narration was sparse and just the right amount for this type of film.  I was glad to see that this film was slowed down a bit and some of the breathtaking views were shown.  It makes you want to go there even more.   At around 35 minutes, it's not too long or too short.  It covers several lakes and areas, and only scratches the surface of what is available in the park.
I don't often push films on my blog, but this one is great and well with getting.   Once you watch it, you may be wondering why films are not made like this anymore.  Most new films are like uber-fast fly rods.  This one, like a good dry fly rod, is smooth and relaxing and lets you enjoy it.
You can order here.  http://www.rockymountainflyfisher.com/rocky%20mountiain%20national%20park%20movie.html