As I casted my flies into the small rapid of water, I shouted to the youngster across the pool from me.  "Hey, did you see that?" It was one of the brightest rainbows I have ever seen.  It came up in the fast water, eating something off of the surface......

David Knapp of The Trout Zone blog and I were finally able to met up to fish together.  We have been planning this for a few months now.  When I heard that he was relocating to Colorado from Tennessee, I figured that I would invite him to go fish together.  Usually, these things never work out as he wasn't even going to be in the same area as I am in.  He moved up north and I am in Colorado Springs.  The good thing about that is that Colorado Springs is on the way to Pueblo!  We hatched a plan to fish in Pueblo.  It is a great little tailwater, unlike any other tailwater that I have ever fished.  It has gained some well deserved attention from anglers all over the state.  Over the years, the fish have grown and on any given day, you can catch a 20"+ fish.  Of course, there are smaller fish if you don't want to discriminate.

We started off slow as we worked our way up stream, looking to see where we could squeeze in.  It didn't take long to find a spot and start tossing out our flies.  I took 2 rods with me.  I usually don't take two rods on the water, but what the heck? You have twice as many chances to tangle up right?   I rigged them differently and added a different midge on each one of them.  I figured they were eating small bugs and the guess paid off.  After a few minutes I had on the first fish.  It was on a #26 Rainbow Warrior.  That fly and the #26 Foam Back Emerger, proved to be a good choice for the day as all the fish I caught ate the #26. 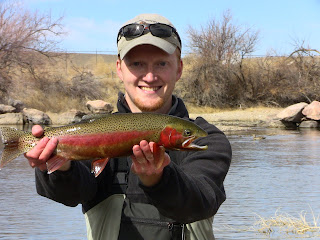 David didn't take too long to start hooking up and had the first bigger fish of the day.  These fish are colored up and are as bright as anything I have ever seen. 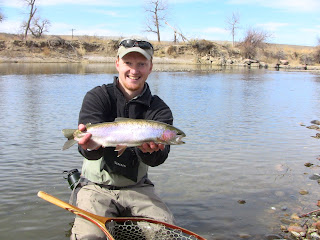 He continued to hook and land fish. I experimented with the Foam Back Emerger and it was just not what they were wanting.  I went back to the Rainbow Warrior and it was fish on again.  Crazy how that works.  Just small differences on the patterns, but it made a difference.  We both agreed that the flash must be what they were looking for at that time of the day. 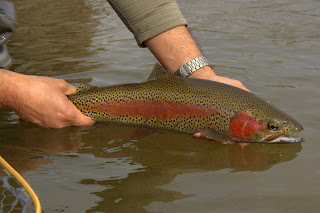 As the day progressed, we moved around a bit and found some more fish.  Perhaps one of my best fish I have ever caught was at the hole pictured below.  It was a great fish, but what will I will forever remember is how I watched the whole thing unfold in about 4 seconds.

As I casted my flies into the small rapid of water, I shouted to the youngster across the pool from me.  "Hey, did you see that?" It was one of the brightest rainbows I have ever seen.  It came up in the fast water, eating something off of the surface......It was a beautiful fish and he just ate something off of the surface.  As soon as those words left my mouth and my smile relaxed, I said to myself, maybe he ate my Foam Back Emerger......I did just cast my flies into the water right before the fish ate something off of the.......  I immediately raised the rod and felt the hook set and the fish start moving towards the rocks.   David was re-rigging and watched the whole thing unfold. 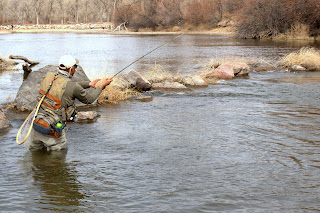 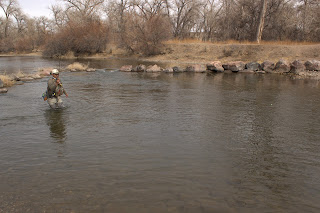 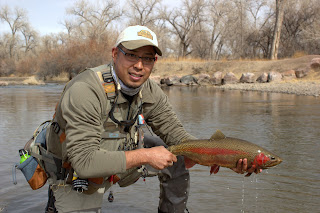 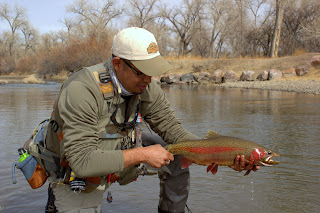 Whenever you fish with someone new, you never know what to expect.  I was pretty sure that David could fish.  I have followed his blog for a while now and I have been jealous more than a few times with his trips and his time on the water.  It was evident that he was fully capable of adjusting to the new landscape and the waters he now calls home.  We fished and walked and walked and fished.  It was not hurried, it was a relaxed day of fishing.  We didn't try to get in too many last casts.  We didn't want to stay all day and try to catch as many fish as we could.  It was just good to get out for both of us.  It was fun and that is what it is all about right?  New friendship and some trout.  We strolled back to the car to head out and grab a bite to eat.  That was my kind of day.  Relaxed and good.  There will be more adventures in the future as I am already working a plan for an Upper Arkansas River trip.  Stay tuned. 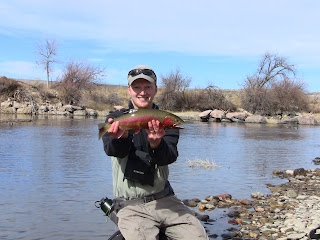 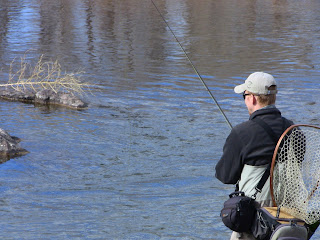 Make sure to read David's point of view at his blog, The Trout Zone