Just this week, scientists released information that turned the local fly-fishing world upside down in Colorado.  The Greenback Cutthroat Trout, the Colorado State fish, was determined to reside in only a 4-mile-long section of a small creek not to far from my home in Colorado Springs.  Yes, you read that right.  The purest strain and the only link back to the original linage of one of the indigenous strains of trout in Colorado reside within 15 miles the hustle and bustle of a city, Costcos, meth labs and Apple Retail Stores.  This essentially crushes our idea of finding these fish in wild, remote, pristine areas, not touched by man.  Not only that, but the Greenback’s natural drainage was the South Platte River.  This stream is located in the Arkansas River drainage.  I will spare telling you all the details; you can read the press releases here.

Let me tell you that I am very pleased that they found these fish and the research has determined that they are pure strain and steps have already been taken to protect the fish as well as some being used as a brood stock.  I give credit to the researchers for taking the time to do the work and to process all the information to get where we are now. The technology didn’t exist to get these results several years ago.  There was recent research that supported the idea that all of the cutthroats east of the Continental Divide were probably not pure stains.  There was an understanding that Greenback Cutthroats were “mutts”.  A mixture of different fish originally thought to be native to the drainage.  This new evidence has shaken the foundation of cold-water conservation and the restoration community.  Now, it’s time to go back to the drawing board and plan the new path forward to save these pure stain cutthroats.

It is ironic that the same people who gathered fish from the west slope and from California, Germany and Scotland, to spread the wealth in fish diversity, wrecked the fragile balance of the cutthroat’s existence.  Some of these same people moved the native Greenbacks around from drainage to drainage and this is how one isolated pocket of fish survived all these years.   I just thank God for those that put these fish in this stream and did so over a hundred years ago, never knowing they were protecting these little gems from the rest of the world and from extinction.

What I find amusing is that while we were happily trekking up to high mountain lakes contained within remote wilderness areas to hold one of the few remaining specimen of this species, it turns out that we were fooled; we were holding an imitation. While we were admiring these fish at 12,000’ elevation, the real deal was miles away in a different drainage within miles of strip clubs and hookah bars.
So, what are all those fish in the pictures were have plastered all over the Internet?  They are all beautiful fish no doubt, but they just aren’t pure Greenbacks.   They are a cross of this and that, essentially, a “Colorado mutt”.  Some East Slope genes mixed with some West side genes, a little bit of Gunnison River, Colorado River and maybe some South Platte River genes mixed in to make a good looking trout.   For me, catching those fish at 12,000’ feet is still just as exciting today as they were before.  I can’t say I like them any less.  I care about indigenous trout and I have held some pure strain Rio Grande Cutthroats in my hands after fooling them with flies.  I have also held many brown trout with mixed European genes and they all bring a smile to my face.  Knowing the fish in my hands is a pure strain brings me a bit more of a smile knowing we have not ruined everything yet.  I hope that day comes for all of us, knowing for sure the Greenback Cutthroat in our hands are the real deal.  Until then, I will continue to look to the west and think of all the small streams and high mountain lakes filled with “Colorado mutts”.  I will daydream about what fly pattern I would cast to them.  And when I hold them in my hands, before I release them, I will grin all the wider because they are still beautiful. 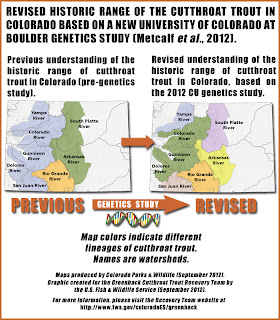